How to Frame Past Perfect Tense: a guest post by Will Limón

A brief word from Kim: I describe past perfect tense as the past of the past. Grammar Girl, Mignon Fogarty, says to write past perfect you use had + past participle. That's excellent information for a line or two, but a bunch of "had's" on a page gets cumbersome. I had to check in with my friends, Will Limón and David Deen, to learn how to introduce past perfect tense in the framework of a story.
Q: Will Limón, friend, critiquing partner, and go-to guy for the rules (other than David )...how the heck do you frame a situation in past perfect tense?
Will:  Here's my understanding of how past perfect works.

You're cooking along in a piece, using past tense consistently.

A character remembers an action that happened in that character's past, and you (the author) want to recount it within the story.

You continue on with your story, using past tense as before.

Here's a rather overwrought example off the top of my head. Let me know if it's clear for you.


A short excerpt by Will Limón for your past perfect entertainment privilege:

She sat down at her desk and opened the drawer. The ivory invitation stared her right in the face, its fancy letters mocking her like the echo of his voice.

“After all this time you're finally invited,” he had said. “I bet you won't go.” He had slumped onto the sofa, smirking, and daring her to fight.

She hadn’t looked at him. Instead she gazed out the window at the roses. They were just about to bloom. She stared hard as if the bursting buds were the only thing that mattered in the world.

“Well?” he said.
“Well, what?”
“Are you going?”
She turned away from the window and back to the room, avoiding his eyes. But she felt them. They pricked at her more sharply than the thorns on those rose stems. Something had to give.

He had laughed. Before he had the chance to say anything else, she’d had him thrown out.

She picked up the invitation and dropped it into the wastebasket. There, that's better. Much better.


Writing the Flashback in Fiction
Past Perfection at Writer's Relief Blog

Email ThisBlogThis!Share to TwitterShare to FacebookShare to Pinterest
Labels: Grammar Girl, had plus past participle, how to fiction writing, past perfect tense

Book Review: As If 12 3/4 Isn't Bad Enough, My Mother Is Running for President 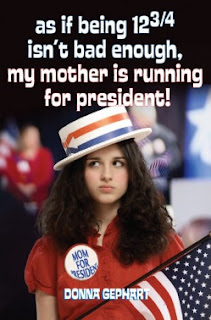 The word, H-I-L-A-R-I-O-U-S.
As If 12 3/4 Isn't Bad Enough, My Mother Is Running for President (Delacorte Press/Random House Children's Books 2008) by Donna Gephart is about seventh-grade Vanessa Rothrock who has a few wishes in life:
5. win the spelling bee;
4. discover her secret admirerer's identity;
3. receive a gift (the gift!) from the boob fairy;
2. snag another wink and phone call from Reginald;
1. keep Mom safe and out of the election.

It's easy to see why As If 12 3/4 Isn't Bad Enough, My Mother Is Running for President won the 2009 Sid Fleishman Award presented at the SCBWI's national convention. The Sid Fleishman is the prestigious award granted to honor an author "whose work exemplifies the excellence of writing in the genre of humor." Translation: the book is snort-out-loud funny.

As If 12 3/4 Isn't Bad Enough, My Mother Is Running for President


Book Jacket: "As if being 12 3/4 isn’t bad enough, Vanessa Rothrock’s mother is running for president and it’s ruining her life. Isn’t it enough that her enormous feet trip her up all the time, even on stage during the school spelling bee? Isn’t it enough that Reginald Trumball, love of Vanessa’s pathetic life, read her personal and private list of deficiencies to some boy she doesn’t even know? And that the Boob Fairy hasn’t visited her even once?! Doesn’t Mom realize that Vanessa needs her more than the rest of the country? More importantly, doesn’t she realize that she may be in grave danger? Vanessa's receiving threatening notes at school–notes that imply some psycho has it out for her mother at the Democratic National Convention. Vanessa might be the only person who can save her. But does she have the courage to do what that requires?"

Posted by Kim Tomsic at 9:11 AM No comments:

KIM: Welcome Holly Schindler. Thank you for visiting my blog to answer one quick quirky question . If you were to have a FREAKY FRIDAY switcharoo moment that lasted just for a day, would it be with your mother, your Pekingese, or with one of your characters (and if so, which character)?
HOLLY:  My knee-jerk reaction is to say my Peke, Jake. That dog should truly be crowned World’s Most Spoiled. He gets the steak while we eat the hamburger. And he’s truly the most loved little thing on the planet. I’m sure everybody thinks that of their animals, though...
If I could switch places with one of my characters, I’d switch with Brandon , Chelsea ’s brother in PLAYING HURT.
In the first place, I really love the way that Brandon just is who he is…He’s probably the most open of any of my characters. There’s such a joy about him, as he dances onstage in Pike’s to his music.
… Brandon also never sits on anything, lets anything fester inside. He speaks his mind. He lets Chelsea know exactly what he thinks—when he suspects she’s hurt during her last game, or when he suspects she’s having a love affair with Clint.
He’s also really trustworthy—the kind of person Chelsea knows she can rely on. He’s the person she reaches out to, after Gabe’s learned the truth about Clint and has stormed out of their hotel room. And even though Brandon doesn’t like how Chelsea ’s handled Gabe, he does rush to The Carlyle to help her out...
In a lot of respects, Brandon ’s the kind of person everyone strives to be: honest, dependable, totally unashamed to put himself out there.
So, yeah— Brandon . If I could be anybody, I think I’d be him. 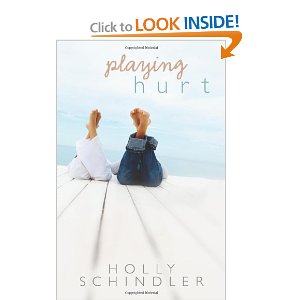 PLAYING HURT Jacket Copy:
Star basketball player Chelsea “Nitro” Keyes had the promise of a full ride to college—and everyone’s admiration in her hometown. But everything changed senior year, when she took a horrible fall during a game. Now a metal plate holds her together and she feels like a stranger in her own family.
As a graduation present, Chelsea ’s dad springs for a three-week summer “boot camp” program at a northern Minnesota lake resort. There, she’s immediately drawn to her trainer, Clint, a nineteen-year-old ex-hockey player who’s haunted by his own traumatic past. As they grow close, Chelsea is torn between her feelings for Clint and her loyalty to her devoted boyfriend back home. Will an unexpected romance just end up causing Chelsea and Clint more pain—or finally heal their heartbreak?
A BLUE SO DARK Jacket Copy:

Fifteen-year-old Aura Ambrose has been hiding a secret. Her mother, a talented artist and art teacher, is slowly being consumed by schizophrenia, and Aura has been her sole caretaker ever since Aura’s dad left them. Convinced that “creative” equals crazy, Aura shuns her own artistic talent. But as her mother sinks deeper into the darkness of mental illness, the hunger for a creative outlet draws Aura toward the depths of her imagination. Just as desperation threatens to swallow her whole, Aura discovers that art, love, and family are profoundly linked—and together may offer an escape from her fears.
Posted by Kim Tomsic at 6:42 AM No comments: