The Future of Us: Hagen Daz at Carrot Calories 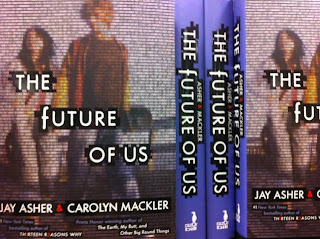 THE FUTURE OF US: Review by Kim Tomsic

It's a book that offers two for the price of one! The Future of Us by Carolyn Mackler and Jay Asher will capture your imagination within nanoseconds. You couldn't possibly expect anything less; Mackler and Asher are two of YA’s best authors. Smoosh together The Earth, My Butt and Other Big Round Things with Thirteen Reasons Why and the result is crafty innovation--The Future of Us.


Jacket flap: It's 1996, and Josh and Emma have been neighbors their whole lives. They've been best friends almost as long - at least, up until last November, when Josh did something that changed everything. Things have been weird between them ever since, but when Josh's family gets a free AOL CD in the mail,his mom makes him bring it over so that Emma can install it on her new computer. When they sign on, they're automatically logged onto their Facebook pages. But Facebook hasn't been invented yet. And they're looking at themselves fifteen years in the future.


By refreshing their pages, they learn that making different decisions now will affect the outcome of their lives later. And as they grapple with the ups and downs of what their futures hold, they're forced to confront what they're doing right - and wrong - in the present


Enjoying Mackler and Asher’s combined talent is like paying for an iPad and getting a free iPhone thrown in the mix; it’s like eating Hagen Daz plus crème brulee at the cost of carrot calories; it’s like paying for Ramada, but staying at the Four Seasons. You get my point.


The Future of Us is told in two alternating first person points of view: high school juniors Emma and Josh. Furthermore it’s told in the unusual format of present tense, which makes the stakes feel high.
Many plot points keep the pages turning in this exciting book--for example there's the nostalgal of life before texting, before caller ID and before Pluto was axed off the list of planets. There's also the thrilling side of the book when readers conjure the heap of possibilities in their own life, possibilities that could be if glimpsing the future was possible.


The Future of Us, written by two award winning SCBWI members,  is a must read and easily earns a five out of five lollipop rating.
Available at:
Tattered Cover
Boulder Books
Barnes and Noble
Amazon

Email ThisBlogThis!Share to TwitterShare to FacebookShare to Pinterest
Labels: Barnes and Noble, Boulder Bookstore, Carolyn Mackler, Jay Asher, Razorbill, SCBWI, Tattered Cover Bookstore, The Earth My Butt and Other Big Round Things, The Future of Us, Thirteen Reasons Why 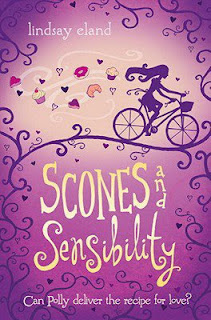 Special UPDATE:
A signed copy of this book is available SIGNED COPY FROM AUTHOR !  But only until December 15, 2014

Tis the season for snow days, cozy baked aromas, and curling up with a good book. Author Lindsay Eland’s Scones and Sensibility won’t bring on the snowflakes, but it will satisfy any middle grade reader with fun entertainment and yummy bonus recipes.


Scones and Sensibility (Egmont 2010) stars a delightful yet meddling main character named Polly. Her resume includes (a) daughter to bakery shop owners, (b) Jane Austen’s biggest fan, (c) romance enthusiast (d) 20th century wannabe, and (e) self-appointed town match maker.  Polly sets out with good intentions and wild plans to provide love and romance to the needy citizens of her small shore community. But she ends up creating chaos to the point that the police become involved.  As the back of the book states, “When Polly learns the pitfalls of playing matchmaker, will she be able to patch up relationships while making sure that love can take its course?”  It’s a question to which any reader will have a fun time discovering the answer.


Scones and Sensibility is packed with a cast of interesting characters including Jack the Nipper, the kite shop owner and Clementine, the older sister. But Polly won my heart with her throw-back ways. She prefers not getting bogged down in the world of iPhones and Wired Magazine, and instead loves the simple life of silk ribbons, doilies and romance books. Polly is no Patti (as in Patti Stanger (the Millionaire Matchmaker), but she’s well on her way!
Available for $6.99 at:
Tattered Cover Book Store
Barnes and Noble
Amazon
Boulder Books