Daemons in the Mist - A Book Review 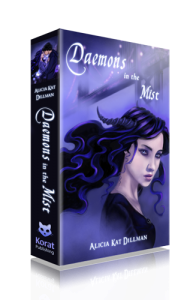 "Seventeen year old Patrick Connolly has been drawn to Nualla ever since he first saw her, but as the years pass she seems to take absolutely no notice of him. Until, that is, he rescues her from a confrontation in the school hallway. Little does he know that he’s about to be thrust into a world of life altering secrets and things that shouldn’t exist, because the fog and mist of San Francisco is concealing more than just buildings."

DAEMONS IN THE MIST by author/illustrator Alicia Kat Dillmn, is a story that takes you on a journey where human and Daemon worlds collide. The opening scene takes place at a prep school in San Francisco. Think TWILIGHT, but replace vampires with daemons.  The story is packed with plot, adventure, sexual tension, and many clever twists and turns.
Daemons in the Mist is YA paranormal romance / urban fantasy cleverly presented from two first-person POVs, high school seniors Patrick and Nualla.
Patrick lives an ordinary life. He has decent grades, a small circle of friends, and parents who neglect him. His crush, Nualla, doesn’t know he exists until a bizarre encounter at school develops and she curiously acknowledges him for the first time.


Nualla lives an extraordinary life. She is beautiful, wealthy, and a Kalodaemon princess. She presents herself as human, but is truly Kalodaemon through and through. This means she’s a “good daemon, like an angel. [Kaladaemon’s] influence humans to aspire to greatness, but are not unfailingly virtuous.”
The Positives: Voice, humor, setting, pacing, characters, plot, intrigue.
The Drawbacks: Gratuitous drinking, gratuitous cussing and a bothersome use of punctuation.
Drawback: I'll get this out of the way first, because the positive is where I want to leave the focus. The biggest drawback I found in the story is the level of gratuitous drinking. The amount of alcohol consumption in this story doesn’t match the plot or contribute to the storyline. It fit in the opening scene, but afterwards it could have been axed or made as simple background noise. Furthermore, Patrick is a skinny, 5’11” boy without a lot of experience with alcohol. In the opening scene (and possibly at Skye’s club) it’s unbelievable that he could quickly consume at least six shots (and then some) without experiencing alcohol poisoning—the level of oxygenated blood would have depleted to dangerous levels when matched to the rate of the shots they took. It’s irresponsible to let YA readers think otherwise. There are other references to alcohol throughout the book promoting drinking as cool (like you can join us if you drink). I found it surprising toward the end when Patrick uses alcohol in attempt to stop his headaches. It seemed he had moved to full on addict mode, but nothing gets developed on this point. I’m certainly not against exposing the reality of teens and drinking.  It either happens in the background of a story, or it develops as a central theme. When liquor is used as a big point in a story, it fits because it adds to the plot or the character arc. In John Green’s YA fiction LOOKING FOR ALASKA, it worked with the character, plot and set of circumstances.


POSITIVES: The positives of this story outshine the few minuses named above. Author Alicia Kat Dillman is a master at painting a beautiful scene. Her words perfectly capture an eerie and magical feel for the San Francisco mists. Furthermore, Dillman does a great job with world building and effortlessly collides the ordinary human world with the daemon world. I found it entertaining that the daemon world is created with a great super-geek genius level of technology, yet they still have an annoying level of bureaucratic red tape to deal with.
I was easily sucked into the plot since Dillman quickly moves the story forward by piling on the tension and adding riveting chapter endings. Furthermore, she clearly has a great sense of humor and successfully achieves character voice in a way that rings true. Funny one-liners are peppered throughout the story and comic relief balances the building tension. DAEMONS IN THE MIST is packed with great pacing and the right balance of dialogue, introspection and action.

Not only is Dillman a gifted writer, she is also a talented artist. You should check out her website at Kat Girl Studio.

Posted by Kim Tomsic at 4:12 PM No comments: 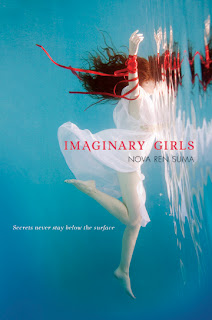 REVIEW: by Kim Tomsic
Author Nova Ren Suma has no idea how fantastic she is. I was an instant fan when I read her middle grade debut, Dani Noir . I certainly couldn't  wait to see what she crafted for her first YA novel. When I discovered that Nova Ren Suma would be at the SCBWI summer conference and signing copies of Imaginary Girls,I planned to be first in line. It was a smart strategy, because I landed a signed first-edition copy. Can you believe she only brought ten copies of this highly desired novel to the conference? Imaginary Girls sold out in two-minutes flat, leaving about eleven-hundred disappointed shoppers. Not to worry, four additional printings have gone to press since the conference. I just checked with Tattered Cover Bookstore and they have a couple of copies on hand at each of their store locations.

My Two-cents:Imaginary Girls is a riveting tale of sisters, Chloe and Ruby. The story opens with a scene of teenage partying followed by a horrific drowning.  Chapter after chapter continue in a gripping and unsettling manner; I turned each page unsure of what was real and what was imaginary. The sisters (especially Ruby) possess the town's attention, and as you read, the characters will capture your unwavering devotion too.
Jacket Flap Description:
Chloe's older sister, Ruby, is the girl everyone looks to and longs for, who can't be captured or caged. When a night with Ruby's friends goes horribly wrong and Chloe discovers the dead body of her classmate London Hayes left floating in the reservoir, Chloe is sent away from town and away from Ruby.

But Ruby will do anything to get her sister back, and when Chloe returns to town two years later, deadly surprises await. As Chloe flirts with the truth that Ruby has hidden deeply away, the fragile line between life and death is redrawn by the complex bonds of sisterhood.

With palpable drama and delicious craft, Nova Ren Suma bursts onto the YA scene with the story that everyone will be talking about