The Next John Green? 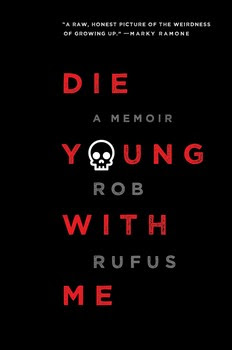 DIE YOUNG WITH ME by Rob Rufus
Clipped from the pages of Simon & Schuster (release date September 20, 2016):

In the tradition of John Green’s The Fault in Our Stars and Me and Earl and the Dying Girl comes the incredibly moving true story of a teenager diagnosed with cancer and how music was the one thing that helped him get through his darkest days.Punk’s not dead in rural West Virginia. In fact, it blares constantly from the basement of Rob and Nat Rufus—identical twin brothers with spiked hair, black leather jackets, and the most kick-ass record collection in Appalachia. To them, school (and pretty much everything else) sucks. But what can you expect when you’re the only punks in town?When the brothers start their own band, their lives begin to change: they meet friends, they attract girls, and they finally get invited to join a national tour and get out of their rat box little town.But their plans are cut short when Rob is diagnosed with a rare form of cancer that has already progressed to Stage Four. Not only are his dreams of punk rock stardom completely shredded, there is a very real threat that this is one battle that can’t be won.While Rob suffers through nightmarish treatments and debilitating surgery, Nat continues on their band’s road to success alone. But as Rob’s life diverges from his brother’s, he learns to find strength within himself and through his music. Die Young With Me is a raw, honest account of a brave teen’s fight with cancer and the many ways music helped him cope through his recovery.


Pre-order Die Young With Me

Rob Rufus is represented by Shannon Hassan, Marsal Lyon Literary Agency.
Posted by Kim Tomsic at 5:00 AM No comments: