Step Aside Charlotte, It's Ivan's Turn in the Spotlight 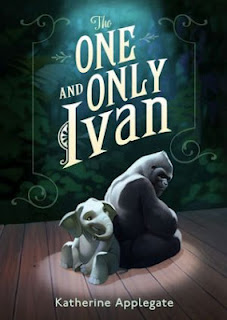 What's as beautiful as Charlotte’s Web and as sweet as George and Martha (with writing for middle-grade readers)? It's Katherine Applegate's newest book, THE ONE AND ONLY IVAN.   Ivan's tale is not told in third-person spider, or first-person hippo; readers get the pleasure of enjoying the story straight from the source--first person gorilla.  Meet Ivan, a charming gorilla whose story will make you laugh and cry.  Ivan is a Silverback gorilla, and if you've ever watched National Geographic, you know that Silverbacks are protectors.  Unfortunately Ivan has spent over thirty years starring in a circus mall’s cheap production. There are no other gorillas to protect. But his Silverback nature comes out when a baby elephant moves into the cage next door, and Ivan is compelled to find a way to save her from a bleak future.

This is definitely a book I will gift over and over again. It’s a story I can’t get out of my head, and the fact that there is a real-life Ivan, makes it all the more magical.

Posted by Kim Tomsic at 9:13 PM No comments: 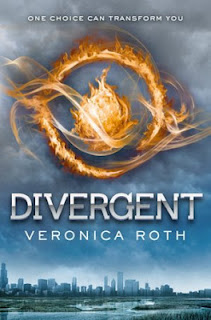 a society characterized by human misery, as squalor, oppression,disease, and overcrowding.

I'd be willing to bet that dictionary.com experienced a massive increase in hits on that word starting in  September, 2008 when the Hunger Games hit bookshelves.  I stumbled on Suzanne Collin's book, looked up "dystopian", and became an instant fan, which is weird. I'm a Freaky Friday fan, and a How Lamar's Bad Prank Won a Bubba Sized Trophy fan, so to say that I'm also a dystopian fan makes me feel a little divergent.

DIVERGENT by VeronicaRoth (released May 2011 by Katherine Tegen books, a division of Harper Collins) is Beatrice Prior’s dystopian experience in a world where five factions exist as five separate communities. Members of factions believe their sect is superior to the others, that they are part of their faction because they think and operate like fellow members, and that factions are thicker than blood. The five groups include: the Dauntless (fearless, sometimes to the point of crazy), the Amenity (Rodney King would have liked them, “can’t we all just along?”), the Abnegation (always putting others first), the Candor (nothing but the truth), and the Erudite (constantly seeking knowledge).  But there are two additional groups; groups nobody wants to belong to:  the vagabonds known as the Factionless, and the secret handful of individuals who hide within one faction even though they could fit into more than one group—the Divergent.
When a young adult turns sixteen, he/she goes through a series of tests to determine which faction suits them best.  At the choosing ceremony the teen decides publicly, and makes their forever-decision. It they don’t choose the fraction where they grew up, they are permanently separated from their family.
Ah, but that’s just the beginning of this fascinating, well plotted,tense,  faced paced page turner.  Author Veronica Roth has crafted a perfect blend of the Hunger Games with a YA Animal Farm element.  This YA debut novel hit the New York Times best seller's list, as did INSURGENT,  book two in the DIVERGENT series.

Posted by Kim Tomsic at 2:06 PM No comments: 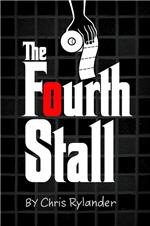 The Fourth Stall by Chris Rylander has been named the 2012 winner of the Sid Fleischman Award for Humor, a yearly award granted by The Society of Children’s Book Writers and Illustrator’s (SCBWI).
Why'd it win? Picture the mafia, the Godfather, and folks saying, “I’m gonna make you an offer you can’t refuse.” Now pictures those folks, the mafioso, as sixth-graders with names like iBully, Prep School, and Kitten!  THE FOURTH STALL is hilarious (hence the award), but it’s also a clever tale about a kid who uses mafia-ish tactics to help schoolmates solve their problems. And just like in The Godfather, this story has intrigue, betrayal, and a level of mystery that would make Francis Ford Coppola smile. You’ll guess and re-guess about the twists until the end.
If you want to buy a great book for a boy or a girl, THE FOURTH STALL is a sure bet. (And in case you're still wondering, it earns a five out of five lollipop rating).