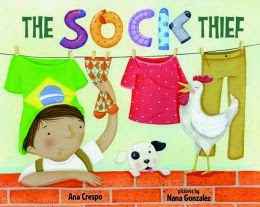 Sleuthy Seven with Ana Crespo—seven answers on how to land a picture book deal (AND unveiling the mystery of the illustrator, illustration notes, etc., too!)

HAPPY BOOK BIRTHDAY, Ana! Thank you for agreeing to an interview and congratulations on your debut picture book THE SOCK THIEF (Albert Whitman, March 1, 2015).  I adore your story set-up—Felipe sneaks through his sunny, Brazilian town, stealing all the socks, but why? He doesn't even need socks, since he wears flip-flops every day. Kids will love solving the mystery of THE SOCK THIEF. I know I'm buying a copy for my nephew, today!

Jacket Flap:Brazilian boy Felipe doesn't have a soccer ball. So, when it's his turn to take one to school, he uses a little bit of creativity… and a few socks. Felipe is the sock thief, but finding socks is not that easy and the neighborhood pets make it even harder. "Au, au, au!" a dog barks in Portuguese. Felipe wonders if he'll play soccer with his friends today or if he will be caught by a tattle-tale parrot? Along the way, Felipe leaves delicious mangoes in exchange for the socks he steals. After he swipes each pair, he twists and turns them into an ever-growing soccer ball. At the end of the day, he returns each pair of socks with a note to say thank you.

And now, getting answers to solving the mystery of scoring a publishing deal.

Q –Ana, you’ll probably get this question during every school visit, but I’m dying to know—how did the idea of THE SOCK THIEF story unfold?

A –It’s a bit of a long story – several years long.  When I was little, my father used to tell me stories about his childhood years.  One of these stories happened to be about how he and my uncle would sneak into my grandmother’s bedroom, get her stockings, stuff them with newspaper, and make a soccer ball.  The story stuck to my mind and came back when I started to pursue a career in writing for kids.

Q –How long have you been writing picture books, and how did you meet your editor (the fabulous Kelly Barrales-Saylor of Albert Whitman)?

A –I started writing seriously in 2012, so I haven’t been writing for a long time – I am one of the lucky ones. I met Kelly during my second Rocky Mountain Chapter SCBWI conference, in 2013.  I was probably one of the first people (if not THE first person) to sign up for the conference and was lucky enough to get a manuscript critique with Kelly.  The critique spots go away quickly, so you really have to pay attention to the registration dates.  The manuscript she critiqued was THE SOCK THIEF.  However, despite meeting Kelly for the manuscript critique, I think we really connected during the post-conference workshop, when we realized our views about picture books were pretty similar.

Q – I understand you have a five-book deal with Albert Whitman, so here’s the question every writer really wants to know—how did you score your publishing contract? (Details, please! How did you score this one, the other four, etc. Tell us the steps from contact to contract).

A –The offer for THE SOCK THIEF came after I sent Kelly the manuscript with revisions. I don’t have an agent right now, so I had to deal with all the aspects of the contract negotiation.  It was a bit of a headache, but everyone at Albert Whitman was wonderful.  They answered all my questions, helped me figure out what I didn’t understand, and etc.  I’ve been pretty happy with the process so far.  After the contract for THE SOCK THIEF was signed, I sent Kelly a list of some manuscripts I had available, including this small series about JP, a very imaginative little boy who is still learning how to deal with his own feelings.  It turns out they were looking for new stories about feelings and the JP books were the perfect match.  We signed a 4-book contract.  The first two books – JP AND THE GIANT OCTOPUS and JP AND THE POLKA-DOTTED ALIENS – are pretty much ready and going to print soon.  They look amazing!

Q –So, you landed the deal. The contract was signed. Now tell us about next steps and how the editing process worked between you and Kelly (and others).

A –Like I said, Albert Whitman is wonderful, and the editing process was just as wonderful.  I was included in most of the steps.  From the very first sketches, they welcomed my comments.  I offered a different, honest point of view, while always keeping in mind that the final decision belonged to Kelly and her team.  And I liked it that way.  It was a great learning experience.  Then, came the marketing.  Again, Albert Whitman has been extremely supportive.  I was lucky to land a contract with such a professional publisher.

Q –THE SOCK THIEF was illustrated by Nana Gonzalez—she did a beautiful job creating fun, lively, and authentic spreads. People always ask picture book writers if they did the illustrations, too. Obviously you did not. Although there are many author/illustrators out there, there are also many authors who are not illustrators, and the publishing house hires the illustrator. Did you have any input on picking the illustrator?

A –No, I didn’t.  However, as soon as Kelly knew who would be illustrating the book, she let me know.  Nana is from Argentina and, as it turns out, her grandfather used to make sock balls as well.  It was the perfect match.  Her illustrations are beautiful.

Q –MORE on illustrations. So we know you wrote the text; Nana Gonzalez created the illustrations; And Albert Whitman found Nana; And you and Nana never met before you wrote THE SOCK THIEF. Since I only have seven questions, I’ll do a sneak-around and divide this question into two parts.
Part one—I’ve heard many editors say that it is typical that the author and illustrator never have a single conversation, and that is done by design—the publisher wants the illustrator to create their vision without being impinged  by the authors vision—keeping the two apart generally creates a richer finished product—was this true for you—were you and Nana kept apart (as in no phone calls or emails with one another during the creation of the book)?
Part two—I’ve heard editors provide mixed responses regarding authors providing illustration notes. What was your experience with this—did you give any art notes prior to or after the creative process?

A –I didn’t have any contact with Nana, but that didn’t bother me.  Albert Whitman was a filter between the author and the illustrator, but I still feel like I participated in the illustration process through my comments.   In fact, that brings us to the answer to a previous question.  The final decision in regards to the book belongs to the editor and its team.  If the author and illustrator exchange ideas, there is a chance the author’s message will contradict the editor’s message.  I am a very practical person.  The way I see it, the editor wants the book to succeed just as much as I do.  Of course, that doesn’t mean I won’t share my opinions, especially when I feel strongly about something.  However, I feel comfortable leaving the decision to the editor.  If I trusted my work to that editor, I must trust her decisions, too.

Q –Where and when are your book signing events?
Right now, I have two signing events scheduled in Colorado Springs, but there may be some more coming up.  You may find an up-to-date schedule at http://www.anacrespobooks.com/#!appearances/csw1.

Thank you so much for this interview, Kim!  It was a pleasure sharing with you and your readers.  I hope everyone enjoys the book.

Email ThisBlogThis!Share to TwitterShare to FacebookShare to Pinterest
Labels: Albert Whitman, Ana Crespo, How to get a publishing contract, How to get picture book published, Kelly Barrales-Saylor, Nana Gonzalez, publishing, SCBWI, The Sock Thief, truth about illustration notes

Thanks for sharing this journey with us Ana and Kim. It's a great conference success story and we love our copy of The Sock Thief!

Congrats on your success! I've read and enjoyed The Sock Thief, so I'm looking forward to reading your other books! The picture book publishing process is quite interesting, especially the relationship between the illustrator and author. It does take a leap of faith, doesn't it? It worked out well for you.

Thank you, Jilanne! I am glad you enjoyed it.

Okay, so this got a little confusing... Thank you, Stacy!!!

Thank you Jilanne! I am glad you enjoyed the book!

Stacy, you are always a bright light to run into at conferences, and yes! Isn't it exciting to hear a conference success story like Ana's! And Jilanne, I agree--that relationship between the illustrator and the author is intriguing to me as well. I believe if you go with a trusted publisher, and as Ana said, if you connect with an editor whom you respect, then that editor will find the right illustrator to create the best work possible--THE SOCK THIEF is a great example of that.